Orthotics – The Modern Way to Prevent Foot and Leg Pain

What are Orthotics?
Podiatric bio-mechanical orthotic devices, also called foot appliances, shoe inserts, foot beds or arch supports, are semi-permanent devices which are placed either on the foot or in the shoe to improve foot function in much the same way that spectacles improve imperfect eyesight. An orthotic may be designed to carry out any one or a combination of different functions. 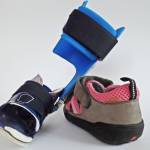 Made-to-measure devices include cushioned insoles, heel raises and various types of removable pads and with competent measuring give very good value. The more sophisticated custom moulded variety require specialist knowledge in order to manipulate the foot into the ideal position for mould taking and various techniques are used. The end result of this process is a plaster cast of your foot which is held in the ideal position for walking and standing. From this the technician will fabricate a suitably corrective device from materials which vary from rigid plastic to soft foam. Often a combination of materials used.
Most people who consider using orthotics are suffering some form of pain, or at least discomfort, and will often be experiencing the first symptoms of some structural or functional abnormality of their feet or legs.

Usually these minor abnormalities can be revealed by a simple examination which involves no more than making about 50 precise measurements and observations. Such conditions as knock knees and bow legs are well known but even more common is a similar sort of mis-alignment at the ankle joint which causes the foot to tilt while it is off the ground. On ground contact it is forced to tilt back in order to realign with the ground. Walking or running on such a foot is like riding a bike with a bent pedal.

Foot Pain and Other Ailments
One of the most common causes of foot problems is weakness in the instep which allows the foot to flatten, lengthen and twist just by a small amount every time the owner takes a step and the foot takes the full body weight. It is due to fatigue of the foot muscles and is common in people with jobs that necessitate standing for long periods, or lifting heavy weights or who are overweight themselves.

It can also be caused by tiny faults in the shape of the foot bones. It produces a sort of wagging movement of the forefoot within the shoe during walking. As the forefoot swings sideways and back at every step, it keeps coming into contact with the shoe, and this repeated shoe pressure from a badly fitting shoe. It can produce corns, callous, bunions and painful toenails. 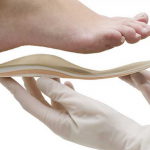 In order to prevent these problems, it is necessary to reduce the excessive sideways movement of the forefoot by stabilising the instep and the heel. One of the best ways to achieve this is by using a custom made support (called an orthotic) which limits the amount by which the instep is allowed to flatten.

Motion Control Orthotics
Orthotics which have their upper surface tilted to the same angle as that of the feet will allow the feet to function at their own natural angle and eliminate the wobble. This type of device is called a motion control orthotic.

Shoes with firm heel counters do not eliminate this sort of wobble, they worsen it. Pronation is part of normal foot function and occurs when weight bearing causes the instep to partially flatten and is the result of the natural springiness of the foot. Over pronation however, is detrimental and the basis of a lot of foot, leg, back and knee discomfort. It is one of the commonest problems to respond to orthotic therapy.

Conditions Which Benefit From Orthotics

Bony Feet
Normal feet, in addition to their springy shock absorbing structure, have a layer of soft resilient tissue just under the skin. Often in imperfectly functioning feet, this soft tissue layer will be very much overworked and if this continues long enough the tissue will become dissipated, leaving the sole of the foot all skin and bone, like the back of your hand. A soft cushioned insole in a suitable foam fabric will help.

This type of insole can be purchased off the shelf and there are many good makes available, but beware of cheap ones that squash too easily as they will be ineffective.

Knee Pain
Over pronation upsets the normal balance of the alignment of the foot, knee and hip and therefore puts a sideways force on the inner side of the knee joint. A suitable orthotic worn in the shoe usually overcome this problem.

Stiff Ankle
Where problems are being caused by insufficient ankle flexion, an orthotic which raises and realigns the heel will often help.

Short Leg
Where the examination reveals that one leg is structurally shorter than the other, a heel raise for the shorter leg will work, provided the discrepancy is less than about 2cm.

Back Pain
Is something else which most people do not associate with misalignment in the foot, but a leg length discrepancy, often intensified by excessive pronation or other significant differences in structure, will cause the pelvis to tilt and can aggravate or even directly  cause, back problems.
This does not mean that all back problems are thus caused but the examination will reveal if it could be significant, and many people have found a great deal of relief by the use of orthotics.

Rigid Feet
Some people have another kind of problem in that their feet are too rigid and have little or no springiness with which to absorb the shock of ground contact. This type of foot is often highly arched with the result that the heel and ball of the foot take a pounding. A perfectly fitting custom made orthotic will spread these forces over the whole of the sole of the foot and if it is made of resilient materials, it will also absorb much of the impact.

Claw Toes
Orthodigital devices for straightening claw toes are remarkably simple and extremely effective and can be made by your Chiropodist in a few minutes from quick setting silicone rubber which is moulded around the toes and allowed to set in situ, thus ensuring a perfect fit.